The Falkland islands are Argentinian ! 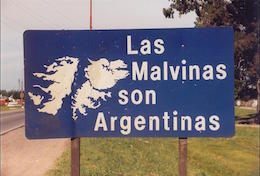 UK out of the Falklands, says the Raelian Movement from Buenos Aires
“How would you feel if Jersey and Guernsey were Argentinian?”

Raël, founder and leader of the Raelian Movement calls for Great Britain to hand over the sovereignty of the Falkland Islands, in a video released today, April 2nd, day of commemoration of the Argentinian attempt to recover this South American territory, still ruled by an imperialist power.

« All the available tricks of democracy should be used by the Argentinian government to convince the Kelpers to vote in favour of a ‘leave UK’ » (see video, link ….) since, there is absolutely no reason for even the tiniest part of the South American continent to remain under European sovereignty, and this also includes French Guyana and all the Indies still colonized.

« How would European nations react if the Channel islands were Argentinian or if Gibraltar were Mexican? Under no circumstances the European would accept such a situation! Then why should South Americans accept in their continent what Europeans would never accept in their own? » declares Raul Cordoba, in charge of the Raelian Movement in Argentina. “Recovering these territories is essential in order to shape a sustainable continental self confidence and construction”, he adds.

Raël called several years ago for a genuine process of decolonization (territorial, cultural, spiritual, economic and political) in a continent which will remain underdeveloped and feudalized as long as the minds and societies will remain shaped by colonial paradigms.
Link Descolonizacion.org ….